The craziest band
in the world.

A popular musical tradition unequalled for originality and fun that has become a well-known symbol throughout Europe: the Racchia di Sarnano, the craziest marching band in the world. A walking orchestra where traditional instruments are flanked by objects of all kinds: pans, grinders, pipes, bed warmers, umbrellas, and the famous flushing, all “played” with exuberance by funny improvised musicians directed by an equally bizarre master.

La Racchia has merged all the peculiarities of the people of the hinterland of Macerata: creativity, a sense of humour, salacious jokes and a pinch of orderly disorder.
In some way we could say, this wacky band is the symbol of “Sarnanoness”. 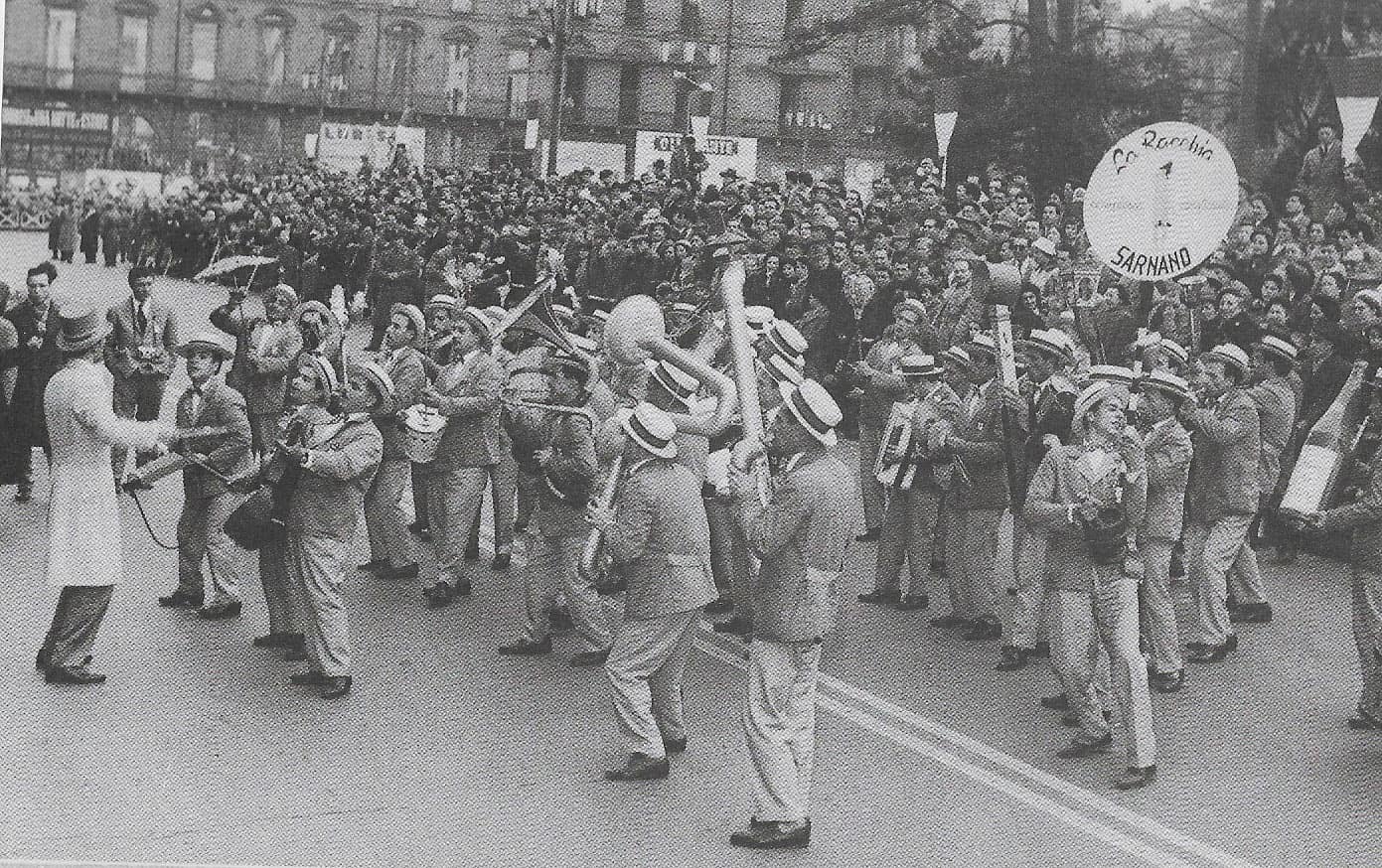 The origins of
this wacky band.

The story of La Racchia is long and so full of anecdotes that we should write a book to tell them all, which luckily has already been done.
The adventures of the Racchi, as the members of the band are called, have been carefully handed down from father to son, printed on paper in the dialectal poems of Egidio Mariotti, and transformed into drawings by the skilful Lando Marzialetti. Today they are part of the Sarnese folk culture and telling them all at once would not do them justice. This is why we would prefer to dedicate an entire section of our blog to La Racchia and their most popular anecdotes.
Here, we settle for telling you about the events that have marked its origin and evolution making it famous in Italy and Europe.

It all starts at the beginning of the Thirties: Sarnano is still very far from being a tourist site. Six young students of the music school of Maestro Gianvittorio Serrandrei founded a small musical band and ironically call it “La Racchia”, which in local jargon is used to indicate an ugly woman. The six musicians are then joined by several friends who, not knowing how to play but wanting to bring some joy and festivity at parties, start using old kitchen utensils to drive the beat and make some noise.

But the adventure of this strange group ends soon: exactly when the invitation cards to parties were replaced by call-to-arms letters, sucking all the joy into the greyness of the war. 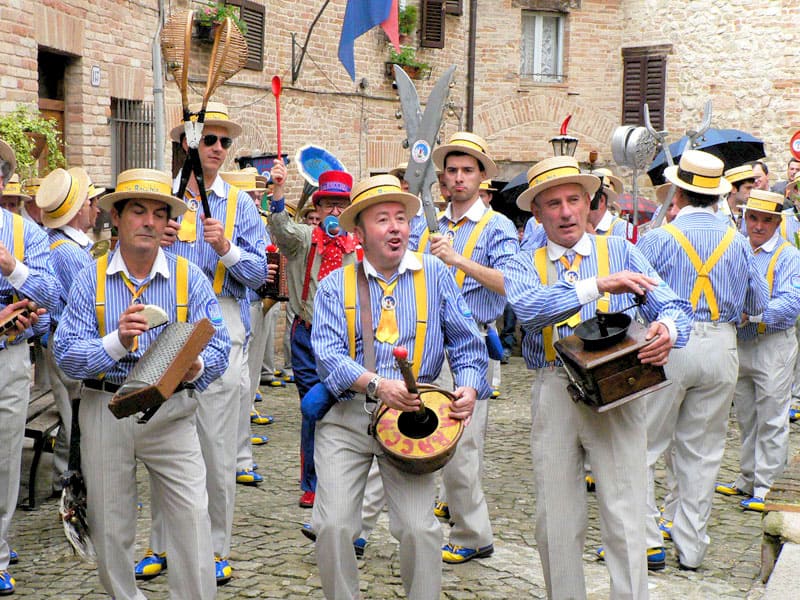 An idea born as a joke
that conquered most of Europe. 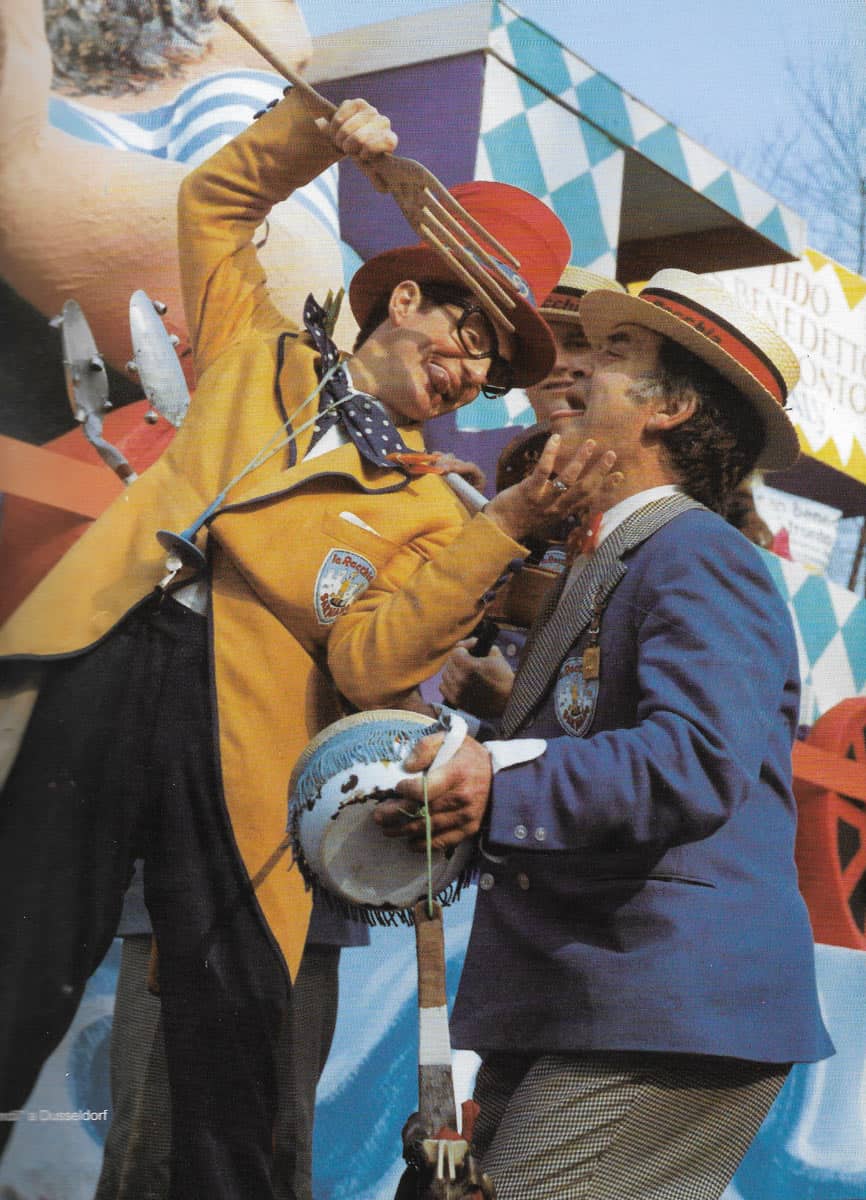 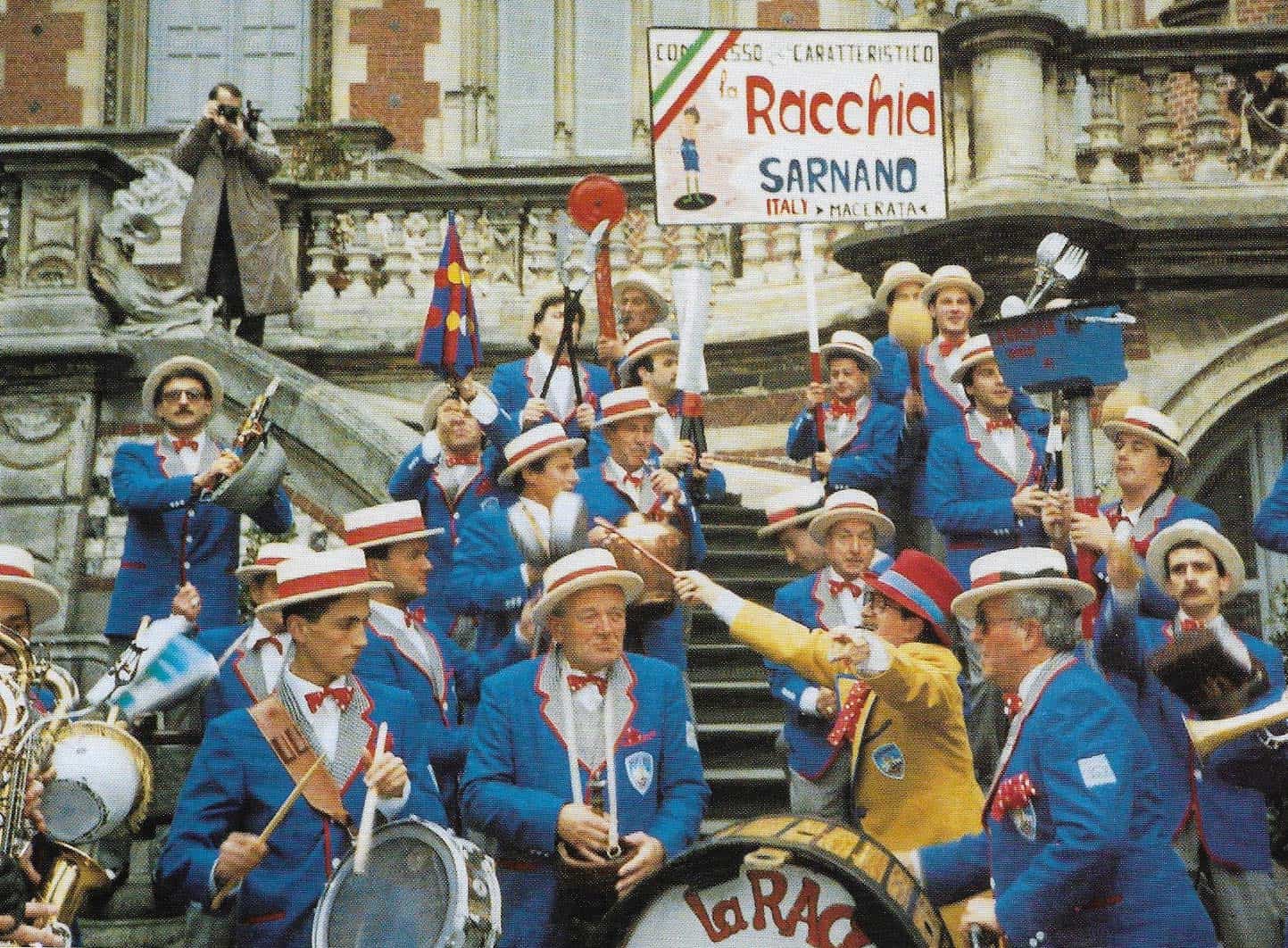 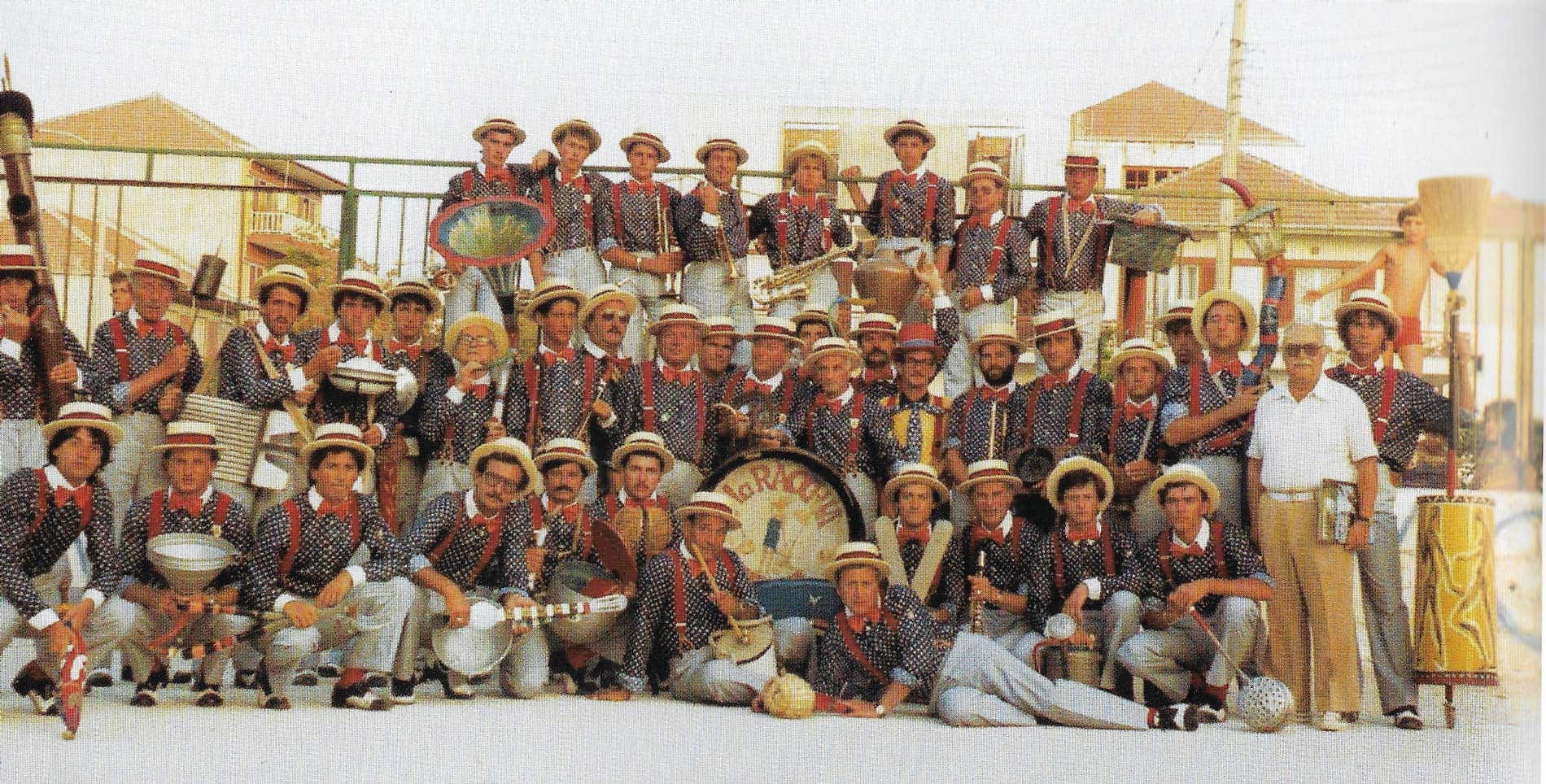 We are in 1956and the will of the Sarnanesi to revive their community after the last world war is strong. The tourist board at this time, the Care and Stay Company, is organising the Carnival celebrations and, for the occasion, they try to reunite the members of the old Racchia. The response to the invitation is immediate: in a few days La Racchia has regrouped, and the number of components is increasing hour by hour, inventing every kind of instrument and dressing up in old, darned clothes.

The success of that first performance is such that within a few weeks new musicians are recruited (real and improvised) and a repertoire is prepared with the most popular songs of the moment. The recycled music instruments become more and more fancy: a broom and a metal cord become a double bass, a chamber pot becomes a “caccavella”, a pan becomes a drum and so on, without any limit to the imagination.

They even bought a uniform: a light blue jacket and black-and-white chequered trousers, a white shirt and a red-and-white dotted bow tie, red socks and black and white shoes. This fun jumble of colours and patterns is topped by a straw hat. The Maestro, wears a yellow raincoat and a red tuba and proudly leads the band with a wooden spoon.

The first Maestro of La Racchia was Pietro Casagrande, a municipal employee who doesn’t know how to read notes, but definitely had all the characteristics required to lead this eccentric band: a sense of humour, congeniality, genius, frankness and a strong feeling for music.

The first official performance is on July 28 1957, during the National Mountain Festival in Sarnano, to which other folk groups from outside the region were also invited. The event was attended by people from all over Italy, who were struck by the weird band. After that day, the performances of La Racchia became highly sought-after, even in the neighbouring regions.

The boom of La Racchia happened by complete chance. The organising director, Franco Lucarini, reads an announcement on Radio Corriere TV, speaking about the television programme“Voci e volti della fortuna”(Voices and faces of fortune), a competition between regions for musical bands, opera and pop music singers. La Racchia applied and was admitted to the regional audition. With great surprise and satisfaction, they were selected to perform live on RAI on November 5 1957, from the Teatro Rossini in Pesaro.

This was a great opportunity as viewers could vote for their favourite group by marking it on the New Year’s Lottery tickets and the winners would attend to an evening live from the RAI studios in Rome. Waiting to know the verdict of the public, on December 1, La Racchia is invited to a show presented by Enzo Tortora at the “Goldoni” theatre in Ancona. It receives quite a few compliments from Alighiero Noschese and the singer Milva.

After a couple of days, the great news: La Racchia receives 21,528 votes and can leave for RAI studies as a representative of Le Marche. Theperformance is a great success, again: La Racchia gets 50,000 votes and is selected for the final evening at the Politeama of Palermo. As you already might have guessed, even the final evening is a triumph: Le Marche gets second place, but La Racchia reaches the top step of the podium as a musical group, collecting 186,694 votes. On 6 January La Racchia are still in Palermo and the prefect personally invites them to parade through the streets of the city.

From that moment on, la Racchia is contacted so much throughout Italy that it has to expand its staff to ensure the availability of a sufficient number of participants at each show. The group performs in Florence, Rovigo, Bologna, Rome, even in the Vatican and parades at the Carnival of Cento, Viareggio, Turin and in many other locations from Sicily to Val d’Aosta: unforgettable experiences for the people of Sarnano at the time.

In 1959, La Racchia was even contacted by an impresario from Toronto, but unfortunately, due to organisational difficulties, they were forced to give up their trip to Canada.

With the possibility of landing overseas fading, La Racchia does not lose heart but continues its ascent. In February 1967, the fame of the Sarnanese band surpasses the Alps and lands a performance in Munich. At this point, it is directed by Maestro Franco Galassi who replaces Pietro Casagrande, forced to retire due to health reasons.
In 1970, Galassi passed his baton (or rather his wooden spoon) to Maestro Gisleno, an accordion player, succeeded in 1973 by Nicola Valli.

In 1974 La Racchia played at the Dusseldorf Carnival, in 1980 in Innsbruck, in 1981 at the International Festival of Folklore on the island of Lefkas where they won the palm of victory once again, and in 1984 they performed at the Nice Carnival.

This is just the beginning of the European trips that became more and more frequent in the Nineties: Belgium, Switzerland, Monaco, Greece, Germany, Austria, Spain and above all France, where the group performs dozens of times in several cities, among which Paris.

Moreover, La Racchia will take part in several TV programmes, performing no less than twenty times on the small screen and receiving praise from the most popular entertainers.

Over the years, they also won prizes of all kinds and won local and national competitions: further confirmation of how such a simple idea can actually be brilliant and appreciated.

A timeless symbol
imbued with the spirit of Sarnano.

Today, La Racchia is more than 60 years old, and, even if almost 80 years have passed since its first line-up, it is still as exuberant and lively as it was on its first day. More than 400 people have played in this group. For many, it is a family business spanning three generations. For others, it represents a phase of life, but for everyone it is unforgettable.

La Racchia is the story of how a joke showcased Sarnano in half of Europe, making it known as the home country of these weird musicians and their absurd instruments.

La Racchia is the expression of the Sarnanese spirit: a bit chaotic but always bright, ironic, and able to smile despite everything.

La Racchia is the symbol of a community always ready to reinvent itself, nurturing its own roots with irony.