Unfortunately, the theater of victory was unusable because of the earthquake of 26 and 30 October 2016.

Le Marche is also known as the Land of Hundred Theatres: this is the number of theatres, large and small, scattered throughout the various villages of Le Marche. Nearly all were built in the early nineteenth century by the will of enlightened citizens. We also find Sarnano among these Hundred Theatres, with its theatre with seating for around 100 guests. A gem of velvet and lights: a “bonbonnière”, as visitors say the moment they enter the parterre.

The Teatro della Vittoria, dedicated today to tenor Mario del Monaco, is located on the first floor of Palazzo del Popolo and still houses a theatre season. It also has its own company, Il Circolo di Piazza Alta, which brings the stage back to life with great passion and dedication. 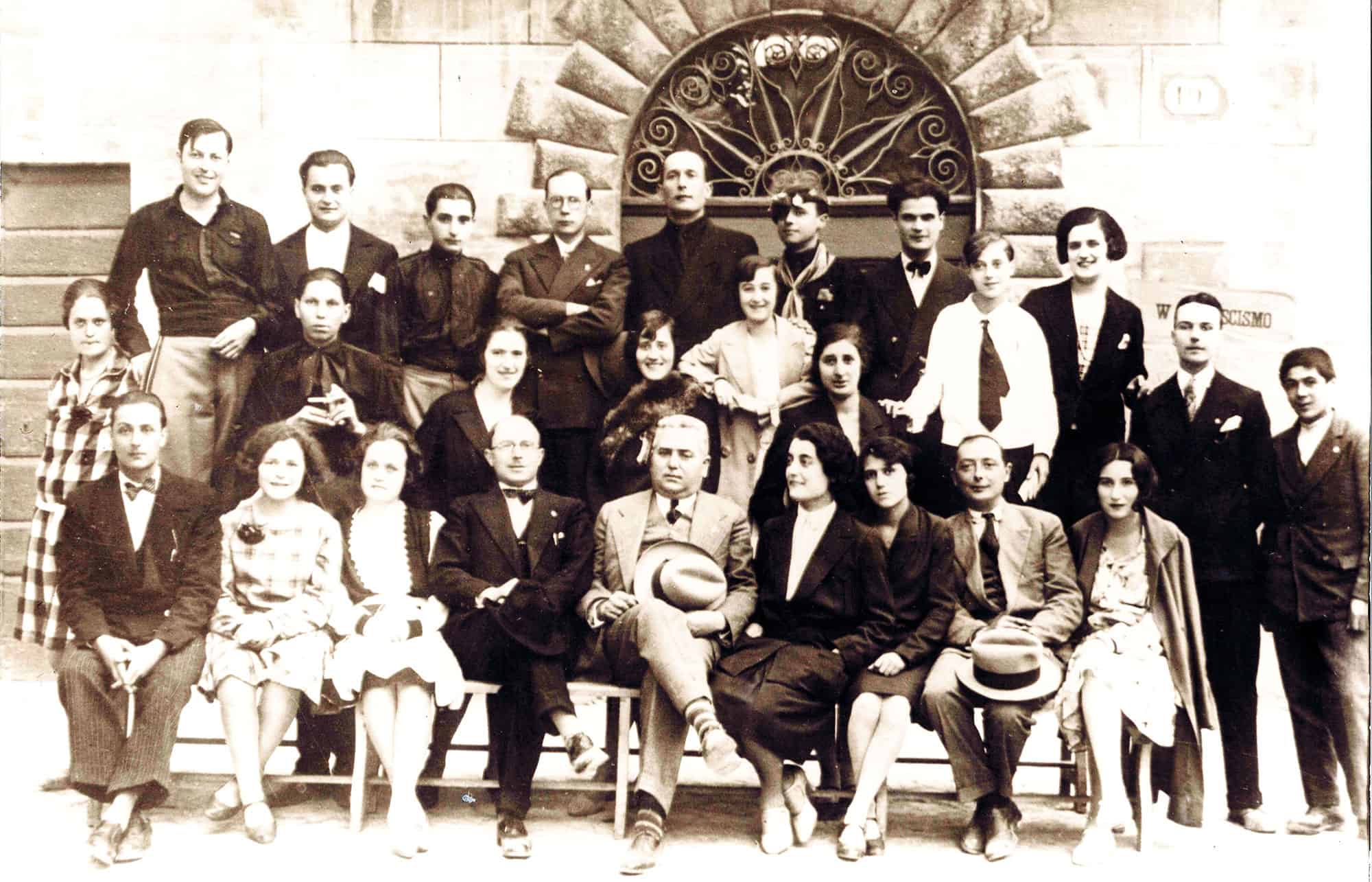 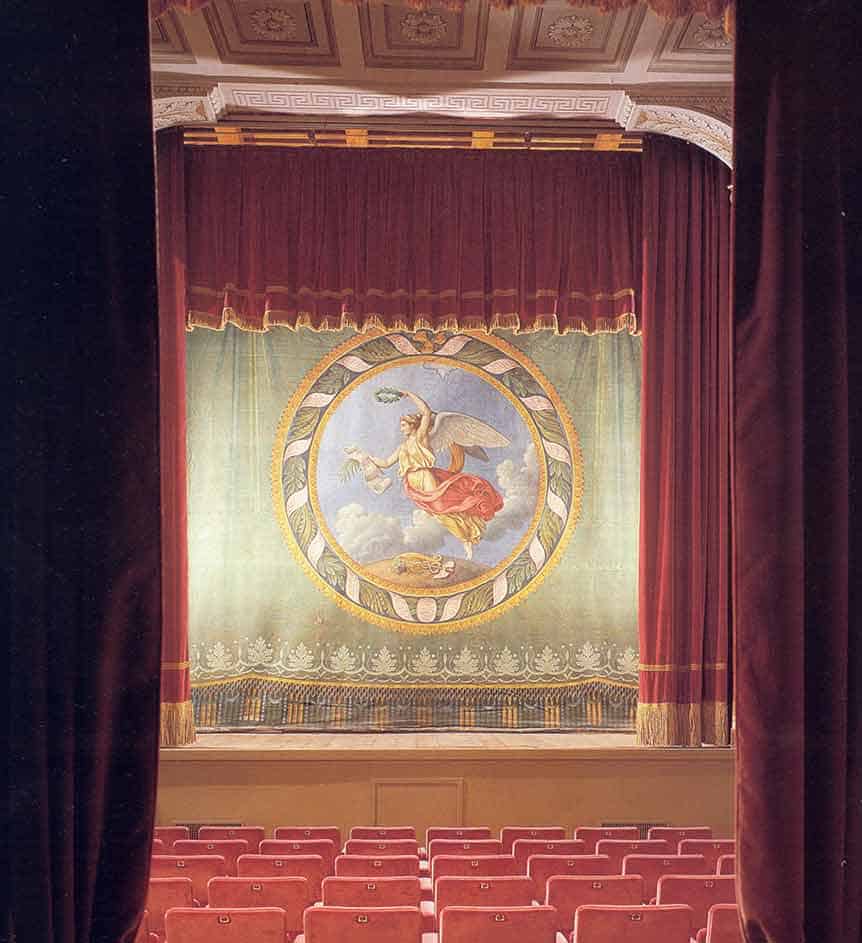 “Lo vène che te vojo Sarnà mio, non saccio come fattelo capì”, I love you so much, my beloved Sarnano, that I don’t know how to show you.

ENRICO RICCIARDI, LOCAL POET
(in the centre of the picture) 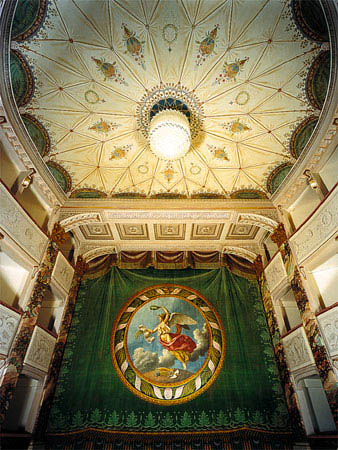 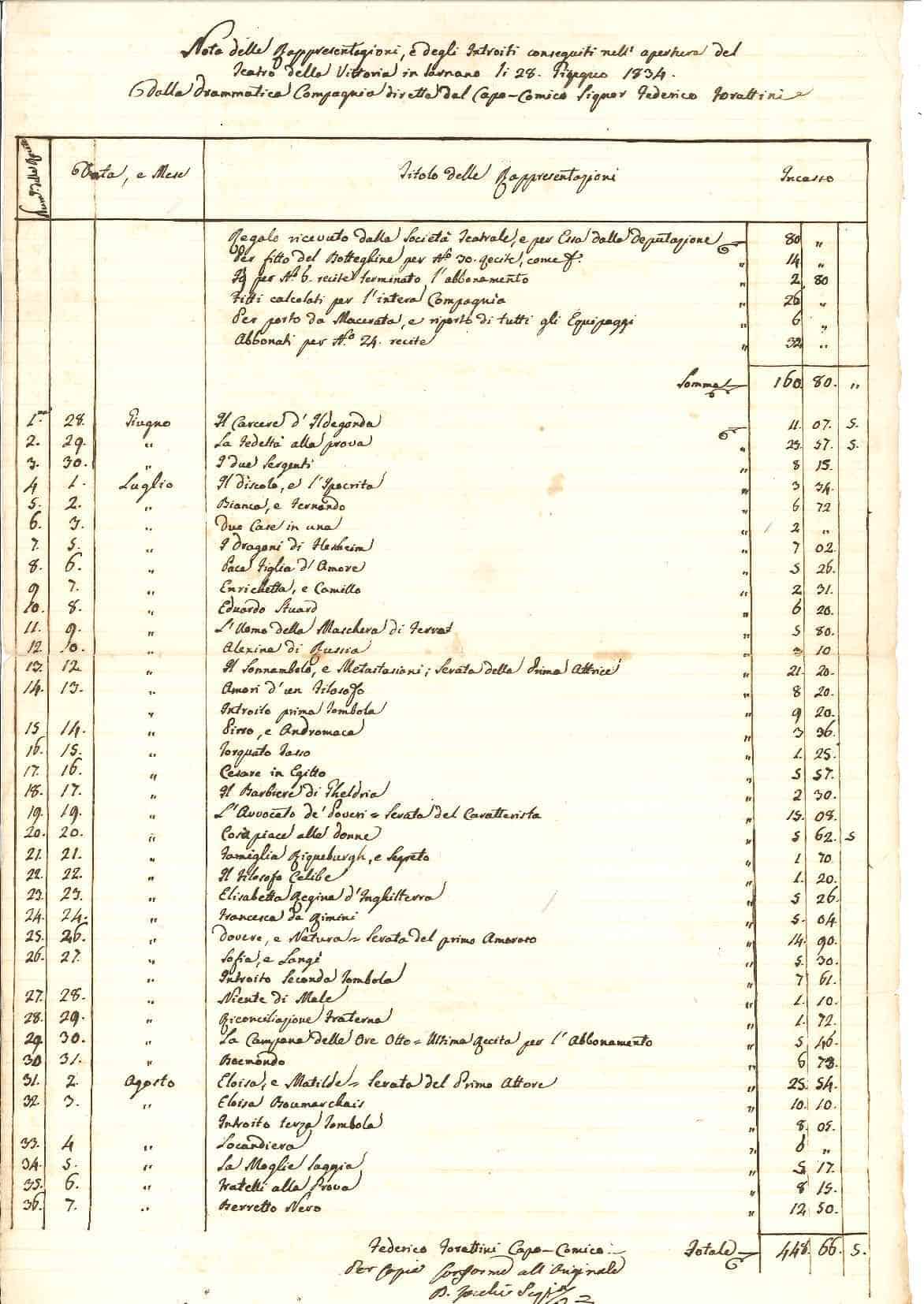 THE ORIGINS — The history of our theatre started in 1829, when a professional partnership was born, initially consisting of thirty-six members called “plachettisti” (the theatre boxers), who wanted to build a “public performance room” inside the Palazzo del Popolo. At first, the project was entrusted to the engineer Luigi Fedeli from Sarnano, who started the construction in 1831. The decorations were carried out by the Bolognese painter Gaetano Ferri, while the curtain showing the “Vittoria Alata” (Winged Victory) was painted by the artist Rossi. The theatre hall is horseshoe-shaped and has three tiers of boxes and, on the vault, there is an elegant neoclassical Roman velar with trompe l’oeilpainted lunettes. The proscenium has two corbels resting on Corinthian pilasters in imitation marble.

The complete Regulation of the Theatre Company dates back to 1896. In it, we read that this was composed of thirty-eight co-owners, including elected honorary officials and members of the Theatrical Deputation, responsible for the seasonal planning. Besides the administration and management of the theatre, however, citizens spontaneously began organising shows, operas and operettas with local artists flanked by enthusiasts and volunteers.

The renovation, post-war period and closure

In 1935, the engineer Alfredo Arrà was in charge of the restoration of the vault. In a publication of 1936, we can read that the decorations of the theatre boxes were retouched and the chandelier was replaced. The outcome of these interventions was not at all positive: the original paintings, made of musical instruments, weapons and vases, were covered with stuccoes in papier-mâché, painted with landscapes. At the outbreak of the Second World War, use of the theatre became more and more limited until its closure: stage sets, furniture and stage machinery were destroyed during the Occupation and used as fuel for heating.

It was only in 1947, after a fundamental restoration, that the theatre was reopened again for the use of the Sarnanese people only. The inaugural show was L’Antenato (the Ancestor) by Carlo Veneziani, a comedy staged by the new Filodrammatica Sarnanese. From this moment on, the theatre was back on track and put on several prose theatrical productions. In the second half of the fifties, the theatre, at this point in its downfall, was transformed into a cinema and used for dance parties until 1968, when, after one last ball, the place was permanently closed awaiting restoration. 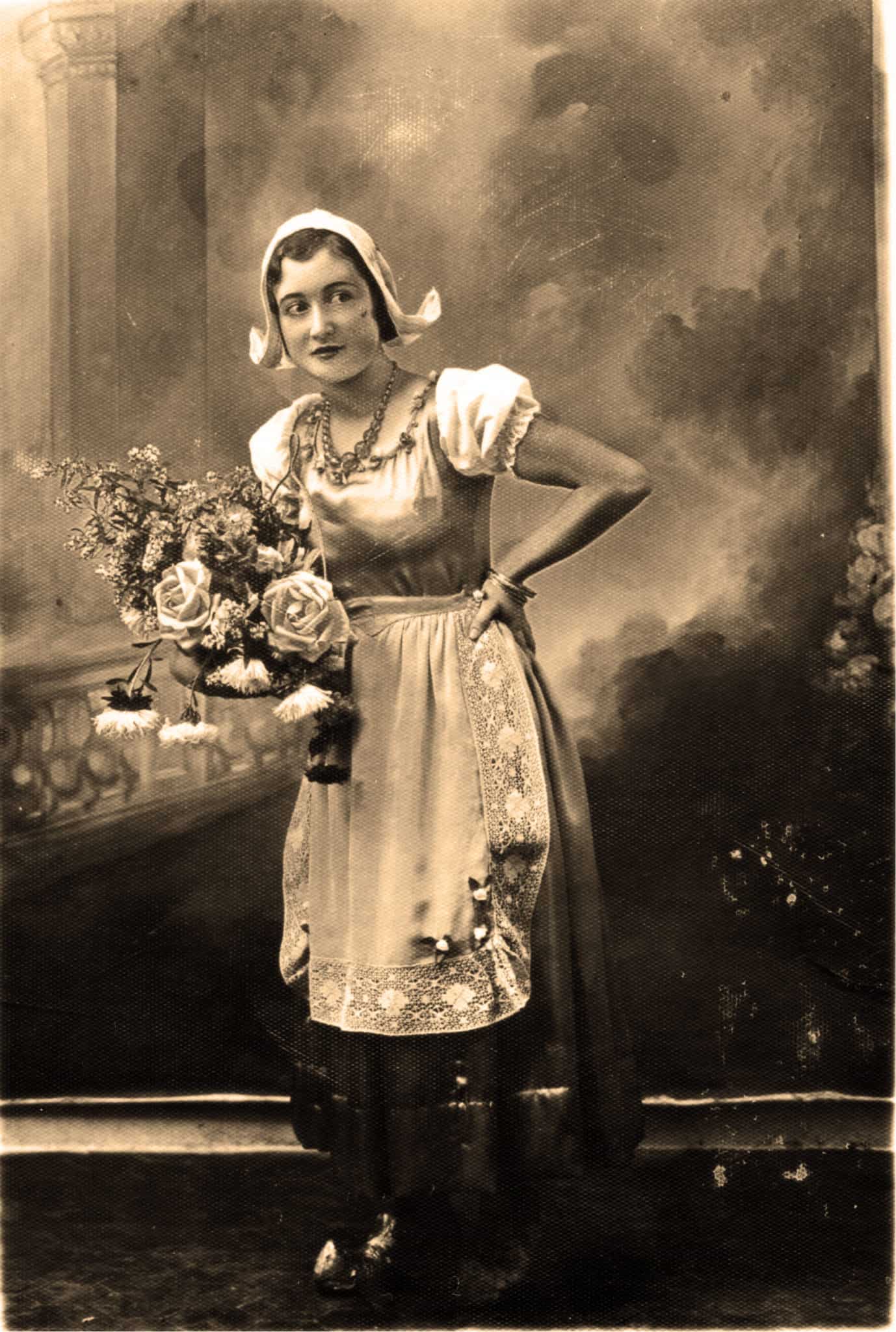 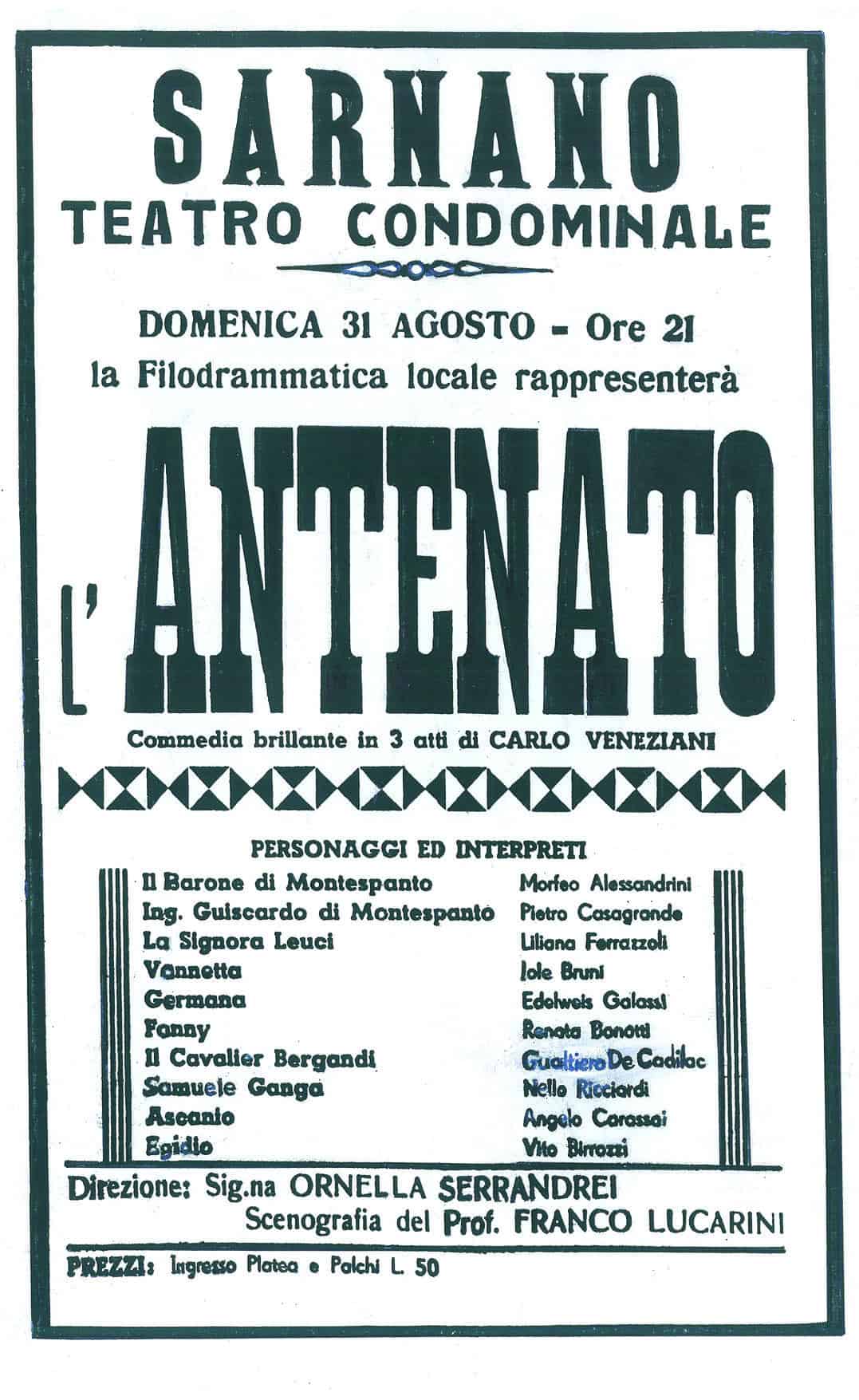 The restoration in the nineties and rebirth

In the nineties, the architect Giuseppe Gentili and the restorer Gianfranco Pasquali took on the restoration process. The main interventions were to remove the stuccoes made in 1935 and to clean up the concealed surfaces, as well as touching up the original decorations, restoring the damaged surfaces and reinforcing the plaster. The new theatre was opened on 18 May 1991 with the show Serata D’amore starring famous actress Piera Degli Esposti.

In 1992 the Circolo di Piazza Alta was established, a cultural association and at the same time a theatrical company created with the aim of making the new-found theatre live, taking up the important and significant experience of previous generations. Nowadays, our theatre is alive and active, also thanks to the commitment of many passionate young people. 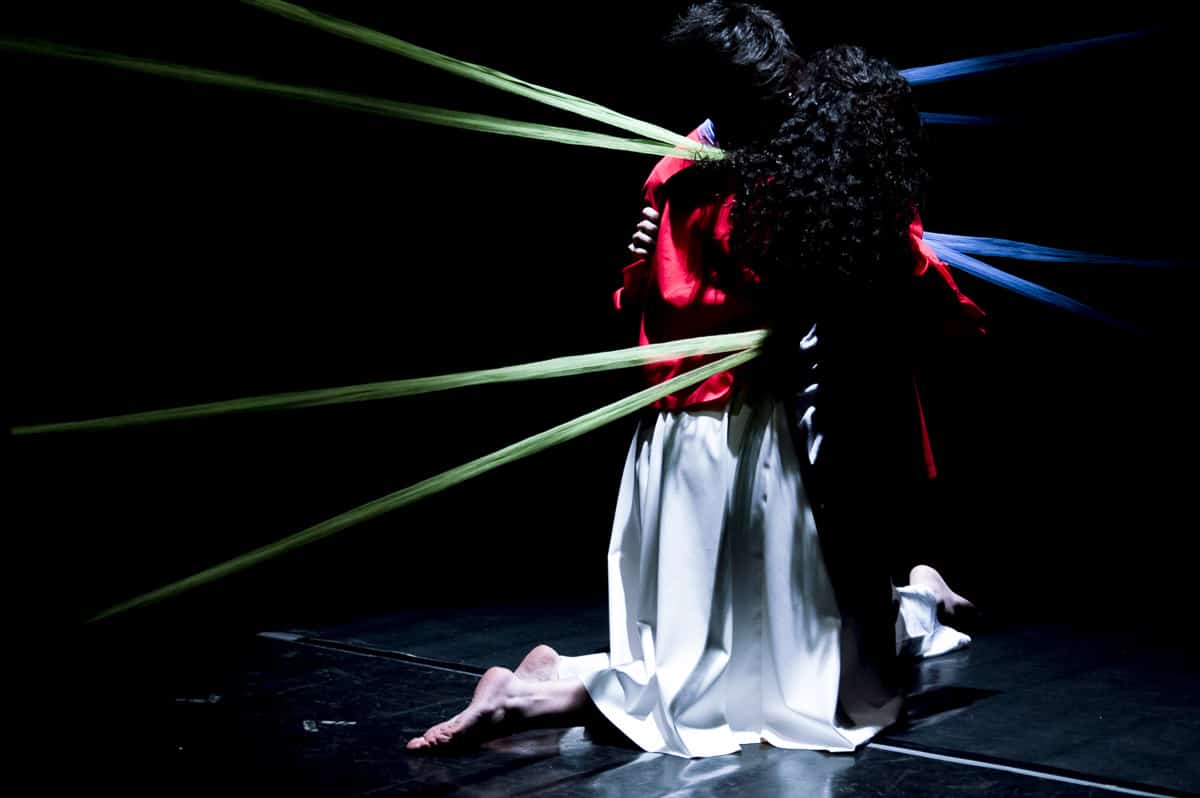 >> Go back to Art and Culture