Majestic framed by the highest square in the historic centre of Sarnano, the Church of Santa Maria di Piazza Alta is a Romanesque cathedral containing frescoes and paintings of great historical and artistic value.
The first construction dates back to the eleventh century when Sarnano was not yet free, and the inhabitants were subject to the Lords of Brunforte, while the religious authority was represented by the Benedictine monks of the still existing Abbey of Piobbico, or Santa Maria inter rivore, located in the mountains near Sarnano. After being proclaimed a free commune in 1265, the monks and the inhabitants of the commune began the construction of the proper church, which was completed only in 1296 with the erection of the tower, whose bells still mark the placid passage of time. The creators of the structure were probably the same Longobard Masters who are credited with the whole architecture of the historic centre, entirely made of bricks. 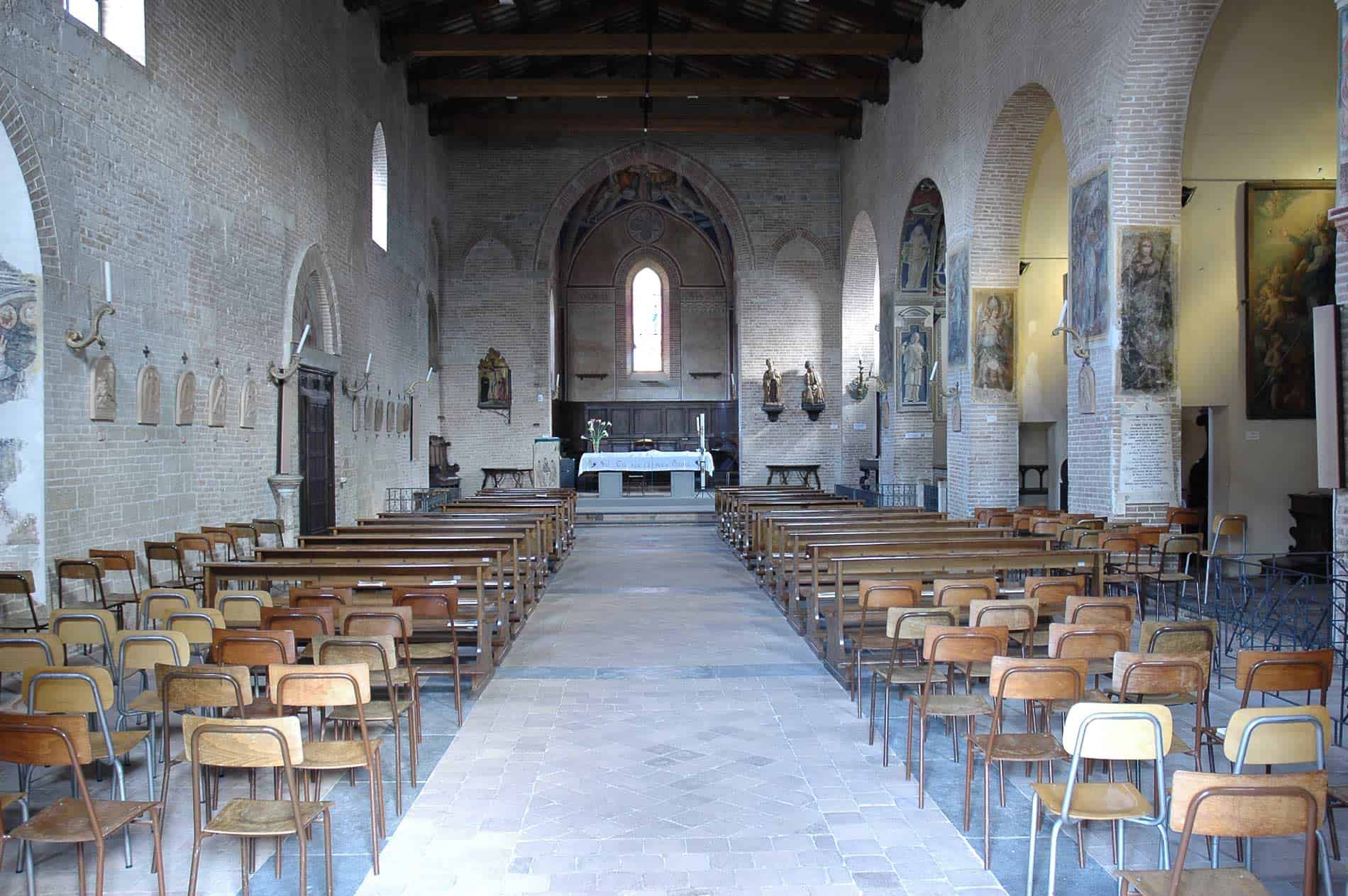 The portal and the nave

The single-nave Church ends with a hall dominated by the tower. At the side of the altar, towards the presbytery, two narrow staircases lead us to the crypt, the pure elation of Romanesque spirituality.
Of particular value is the entrance portal placed at the centre of the façade, between three frames and two grooved ringlets with rhombuses, rosettes, tendrils and foliage made of white stone and ashen grey rings that form a pointed arch in the centre of which stands a representation of the Eternal.
In the lunette over the door, the sleeping Virgin is shown surrounded by the Apostles, while the Eternal appears from the ogive on a cloud. On the right side we see the Saviour and on the left side the soul of the Mother; the Holy Spirit, perhaps fallen in ancient times, is missing. The portal and the lunettes of Sarnano are the only structures in the entire region dedicated to Mary of the Assumption, protector of the village.

Frescoes, sculptures and other works

Inside the church, besides the beautiful, recently restored fresco by Lorenzo D’Alessandro (1483), you can admire frescoes by Antonio and Giangentile di Lorenzo and Paolo Bontulli da Percanestro (who both lived at the beginning of 1500). In the crypt, composed of four arched vaults, you can admire the remains of the frescoes by Pietro Alamanno (late 1400) and Antonio and Giangentile di Lorenzo (early 1500).

Originally, there were also panels by Pietro Alemanno (Madonna of Mercy, 1494) and Girolamo di Giovanni (Processional banner of the fifteenth century); as well as the remains of a polyptych by Niccolò di Liberatore, called L’Alunno, representing the Saints Peter, John the Baptist, Benedict and Biagio. Also of great value are two polychrome wooden statues from the fifteenth century, depicting part of a nativity scene. Now, this artworks are in Civic Art Gallery.

>> Go back to Art and Culture

Find out more or adjust your settings.